Every so often (not too often though!!) I like to show you a card that I don't particularly like - a "dud", so to speak. Here is one such example: 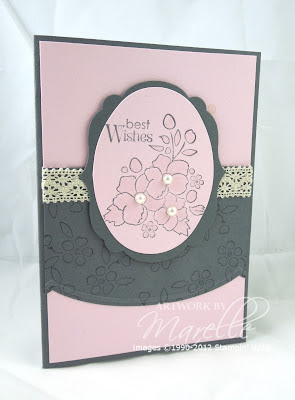 This is one of those cards that I struggled with. I should probably have taken that as a sign that I needed to let it go. But, never one to give up easily, I persisted...and persisted...and persisted. It looks like such a simple card, but I tried different background colours and patterns, different layouts. Finally, I decided that this was as good as it was going to get, but really, it's just a bit... blech.
But I'm being brave and showing you all anyway. Maybe someone out there will see it, and be inspired... even if they're only inspired to make a better version! LOL

Posted by Marelle Taylor at 7:00 am